The Phimai historical park protects one of the most important Khmer temples of Thailand. It is located in the town of Phimai, Nakhon Ratchasima province, about 60 km from Khorat city.

The temple marks one end of the Ancient Khmer Highway from Angkor. As the enclosed area of 1020x580m is comparable with that of Angkor Wat, Phimai must have been an important city in the Khmer empire. Most buildings are from the late 11th to the late 12th century, built in the Baphuon, Bayon and Angkor Wat style. However, even though the Khmer at that time were Hindu, the temple was built as a Buddhist temple, as Buddhism in the Khorat area dated back to the 7th century. Inscriptions name the site Vimayapura (which means city of Vimaya), which developed into the Thai name Phimai 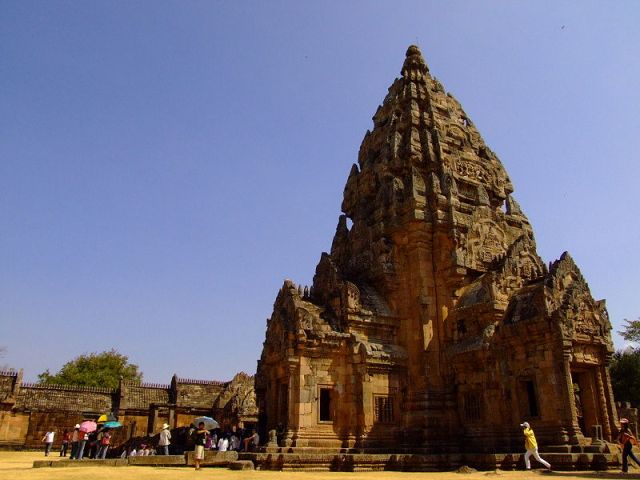 Prasat Hin Phanom Rung (Phanom Rung Stone Castle), is a Khmer temple complex set on the rim of an extinct volcano at 1,320 feet above sea level, in Buriram province in the Isaan region of Thailand, about 120 km from Khorat city. It was built in sandstone and laterite in the 10th to 13th centuries. It was a Hindu shrine dedicated to Shiva, and symbolizes Mount Kailash, his heavenly dwelling.

Located 44 km from Khorat, the cave is located on a back yard of  Wat Khao Chan Ngam. The cave paintings are dated from 3000 years ago. We can found there, paintings of men, women, children in various actions, such as sitting, dancing, standing with a dog, and firing arrow with bows.